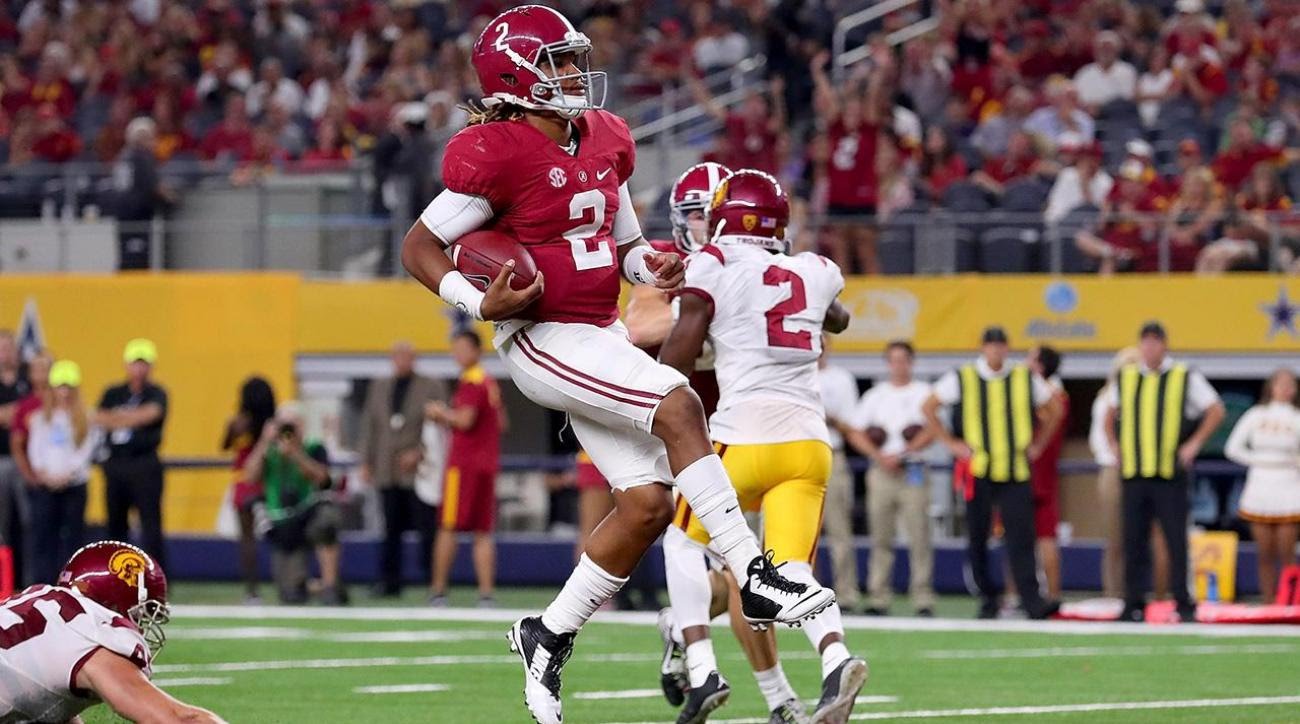 By THE ASSOCIATED PRESS

ARLINGTON, Texas — While Nick Saban wants to see improvement, top-ranked Alabama was pretty impressive in the opening of its national-title defense — without a proven quarterback and with Heisman Trophy-winning tailback Derrick Henry in the NFL.

That Crimson Tide defense, down four players taken in the first two rounds of the NFL draft last spring, is still physical and dominating, too.

“We got off to a little bit of a shaky start in the first quarter, especially on offense,” Saban said. “We scored a lot of points, made a lot of big plays, but still our consistency in execution needs to be much improved. … My focus with our team right now is what can we do better.”

USC coach Clay Helton sees Alabama a little different than Saban after the Trojans were held to 194 yards in their most lopsided loss since a 51-0 setback to Notre Dame in 1966.

“Obviously one game does not make a season. We played a very good team,” said Helton. “They played to their potential. The cold hard truth is we did not play up to ours.”

Stewart was wide open in the end zone behind the secondary when Hurts hit him for a 39-yard score midway through the second quarter that made it 7-3 and put Alabama ahead to stay. They hooked up on a 71-yard touchdown right after halftime for a 24-3 lead, and Hurts later had TD runs of 7 and 6 yards.

The season-opening win came at AT&T Stadium — the home of the NFL’s Dallas Cowboys — was also where the Crimson Tide started their 2012 and 2015 national championship seasons with victories.

The Tide are 10-0 in season openers under Saban, including seven non-conference games at neutral sites against Power Five teams that they have won by an average margin of 23 points.

USC: The Trojans may be targeting their first Pac-12 title since 2008, but they weren’t ready to compete with the defending national champions.

Junior quarterback Max Browne waited three years for his first start, and had a tough time against the overwhelming Alabama defense. He was 14 of 29 for 101 yards with an interception. It certainly didn’t help him that receiver JuJu Smith-Schuster, who had 89 catches for 1,454 yards and 10 touchdowns last season, had only one catch for 9 yards when targeted five times.

ALABAMA: While the Tide are still unproven at quarterback after playing two freshmen, the biggest hole on offense was left by Henry’s absence. Sophomore Damien Harris showed the ability for some big plays with runs of 46 and 73 yards. He finished with nine carries for 138 yards.

Southern Cal defender Jabari Ruffin was ejected from the game late in the first half when at the end of a punt return he stomped his foot into the groin area of Alabama’s Minkah Fitzpatrick, who was on the ground. The play happened right in front of referee Reggie Smith, who immediately threw a flag. When announcing the penalty, Smith said, “No. 40 has disqualified himself from the game.”

USC: The Trojans will almost certainly be unranked before playing their next game. They still have a lot to prove to voters.

ALABAMA: There shouldn’t be any questions about Alabama staying the No. 1 team when the new poll comes out Tuesday.